On 20 July 1969, Astronaut Neil Armstrong made One Giant Leap For Mankind!


"When the lunar module lands at 4:18 p.m EDT, only 30 seconds of fuel remain. Armstrong radios "Houston, Tranquility Base here. The Eagle has landed." Mission control erupts in celebration as the tension breaks, and a controller tells the crew "You got a bunch of guys about to turn blue, we're breathing again." [...] At 10:56 p.m. EDT Armstrong is ready to plant the first human foot on another world. With more than half a billion people watching on television, he climbs down the ladder and proclaims: "That's one small step for a man, one giant leap for mankind." Aldrin joins him shortly, and offers a simple but powerful description of the lunar surface: "magnificent desolation." 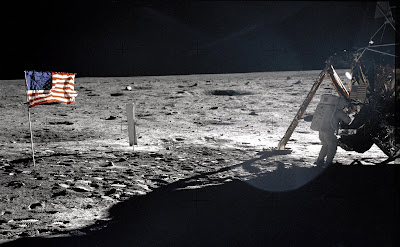