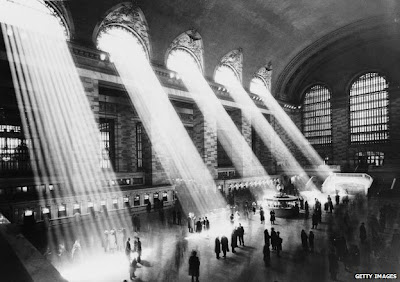 
"...an extraordinary amalgam of technological sophistication and architectural wonder. [...] It was -- and still is -- located at the very epicentre of midtown Manhattan on 42nd Street and Park Avenue [...] At the time of its construction, Grand Central was acclaimed as an engineering marvel. In the subterranean depths of Manhattan, a huge space was carved out, where trains could be boarded from platforms at two different levels, which were approached by gently sloping ramps rather than inconvenient stairs [...] Above ground there arose a spectacular beaux arts creation, all marble and chandeliers and sculpture and glass, the centrepiece of which was a huge and lofty passenger concourse, which drew the eyes of awe-struck passengers heavenwards, where they could marvel at a vast, barrelled ceiling, painted blue and decorated with the signs of the zodiac."

Read the rest. Cannadine also comments on the first boom and then bust of railways, including the destructive consequences on stations like rival-sister Penn Station. And here Sam Roberts excerpts from his book Grand Central in NYTimes 100 Years of Grandeur...


"When Grand Central was finally finished, the only thing lacking was adjectives. The Times produced a special section of the newspaper and hailed the terminal as “a monument, a civic center, or, if one will, a city.” “Without exception,” the newspaper said, “it is not only the greatest station in the United States, but the greatest station, of any type, in the world.” A full century later, the journalist and novelist Tom Wolfewould write: “Every big city had a railroad station with grand -- to the point of glorious -- classical architecture -- dazzled and intimidated, the great architects of Greece and Rome would have averted their eyes -- featuring every sort of dome, soaring ceiling, king-size column, royal cornice, lordly echo -- thanks to the immense volume of the spaces -- and the miles of marble, marble, marble -- but the grandest, most glorious of all, by far, was Grand Central Station.” 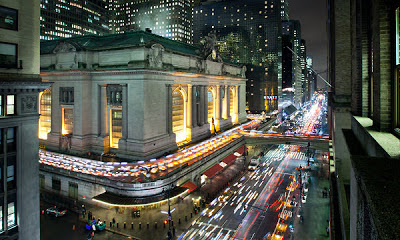