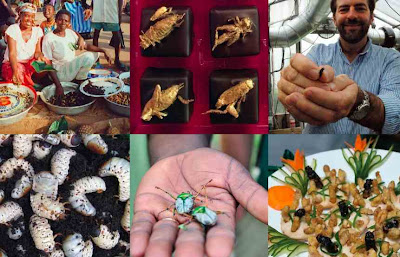 "Insects as food and feed emerge as an especially relevant issue in the twenty-first century due to the rising cost of animal protein, food and feed insecurity, environmental pressures, population growth and increasing demand for protein among the middle classes. Thus, alternative solutions to conventional livestock and feed sources urgently need to be found. The consumption of insects, or entomophagy, therefore contributes positively to the environment and to health and livelihoods. [...] It is estimated that insects form part of the traditional diets of at least 2 billion people. More than 1 900 species have reportedly been used as food. [...] Insects are a highly nutritious and healthy food source with high fat, protein, vitamin, fibre and mineral content. [But] the polarity of views surrounding the practice of entomophagy necessarily requires tailormade communication approaches for each of the various stakeholders. In the tropics, where entomophagy is well established, media communication strategies should promote edible insects as valuable sources of nutrition to counter the growing westernization of diets. Western societies require tailored media communication strategies and educational programmes that address the disgust factor."

The BBC investigates Can Eating Insects Save the World?
Posted by Joost Bonsen at 11:46