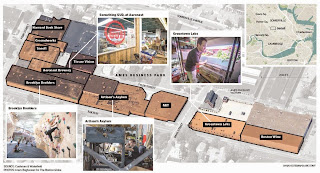 The Globe's Scott Kirsner spotlights the revitalized Somerville, MA Ames Business Park and its many creative tenants in his Innovation Economy column this Sunday...


"The obituary of the Ames Safety Envelope Company was written in February 2010. [...] Most of the equipment was sold at auction, and the factory went dark. [...] The descendants of Ames’ founder considered selling the property, but weren’t sure they could find a buyer. And they fretted over filling the 290,000-square-foot complex with tenants. “I thought it was an almost impossible task,” says Arthur Fitzgerald, grandson of the company’s founder, John W. Fitzgerald. Skip ahead four years: The final chunk of space in the Ames complex was leased this month. And what is now known as the Ames Business Park is not only fully occupied, it also has become the entrepreneurial epicenter of Somerville, home to a brewery, dozens of start-ups, [etc.] It’s a more diverse blend of people and ideas than you’d find in Kendall Square -- in part because rent is cheaper -- and it’s more densely-packed than Boston’s Innovation District. [...] Now, the question for Somerville is how to encourage similar “innovation villages” to spring up. What happened at the Ames complex was a rare confluence of empty industrial space, entities eager to fill it, and a light touch when it came to planning and marketing. [...] Ames, says [Somerville] Mayor Curtatone, “has really had an impact on our thinking as policy-makers about how to preserve such spaces, to allow for more startups and ideas to flourish in Somerville, and to grow that new economy in our city.” Magic can be hard to replicate -- but it’s worth trying." 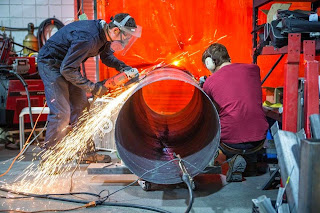