The Boxing Day 2004 earthquake and tsunami in the Indian Ocean -- ten years ago today, December 26th -- was one of the biggest natural disasters in modern memory, killing over a quarter-million people without (much) warning within 4-6 hours in at least a dozen countries -- and triggering unprecedented humanitarian relief efforts. There are several retrospective documentaries of note, but here's a sampling... For those interested in quantifying the catastrophe, first note this NOAA simulation of the tsunami wavefront...

Second, look at this seismographic plot from around the world showing the Earth literally ringing from the rupture of the Sunda megathrust off the coast of Sumatra, Indonesia... 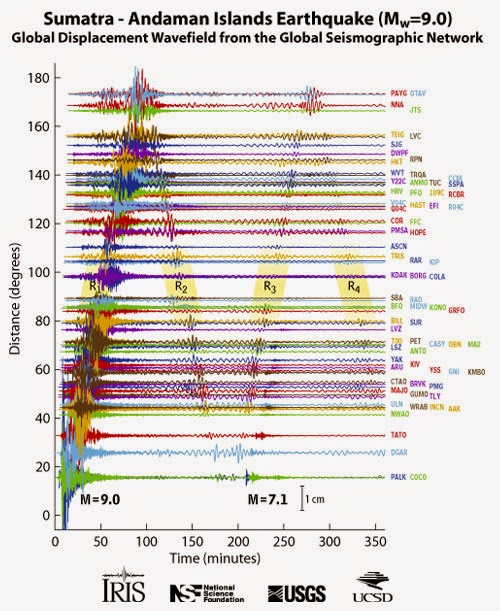 We're learning ever more about quakes and tsunamis and NOAA's research and warning system is on the frontline... Nevertheless, the colossal power of plate tectonics is only one of the deadly natural perils mankind faces. Just one modest-sized asteroid hit, say like Eltanin or Chicxulub, would create quakes and tsunamis that make the Boxing Day disaster seem like ripples in a puddle. Simulate this for yourself via ImpactEarth! For civilizational survival, we need to figure out how to move humanity well beyond our cradle, ASAP.
Posted by Joost Bonsen at 14:44