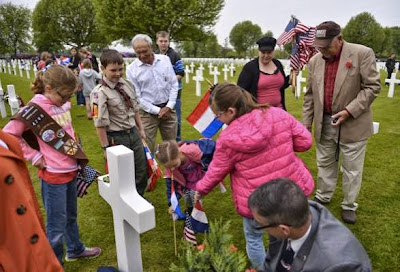 Ian Shapira writes in the Washington Post how Americans gave their lives to defeat the Nazis. The Dutch have never forgotten...


"The U.S. military needed a place to bury its fallen. The Americans ultimately picked a fruit orchard just outside Margraten. [...] Right from the start, Margraten embraced the Americans. The town’s mayor invited the company’s commanders to sleep in his home, while the enlisted men slept in the schools -- welcome protection against rain and buzz bombs. Later, villagers hosted U.S. troops when the men were given rest-and-recuperation breaks from trying to breach the German frontier defenses, known as the Siegfried Line. "After four dark years of occupation, suddenly [the Dutch] people were free from the Nazis, and they could go back to their normal lives and enjoy all the freedoms they were used to,” explained Frenk Lahaye, an associate at the cemetery. “They knew they had to thank the American allies for that. [...] To the Dutch, the Americans were liberators.”

Liberation is the essence and enduring ethos of the US of A and why we Dutch, both locals and expats, remember those who paid for our freedoms with their lives today on Memorial Day since 1945...
Posted by Joost Bonsen at 15:36