History of Coups ~ Visualizations of Attempts...

WaPo's Adam Taylor shares dataset about political coups since the 1950s compiled by political scientists Jonathan Powell and Clayton Thyne. By "coup" they mean illegal and overt attempts by the military or other elites within the state apparatus to unseat the sitting executive...


"Why did they have the first one? Coups also generally occur in disproportionately poor countries that suffer from other forms of political instability (such as protests and/or civil war). In recent years, there seems to be an increasing proportion of coups in new democracies, especially those that seem to already be backsliding toward authoritarianism. Ultimately, the legitimacy of the government is a crucial indicator." 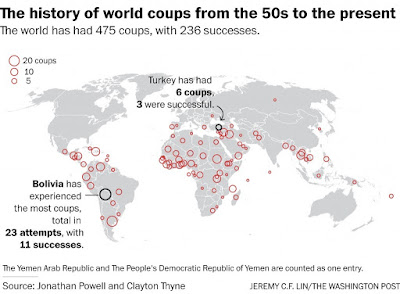 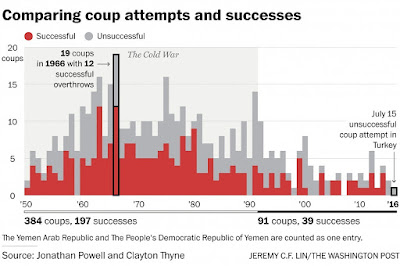