Photographer Jon Carmichael captured an epic image of solar eclipse totality from the air! It's a photo-montage...

"Within a matter of seconds, it goes from broad daylight to completely nighttime," Carmichael recalled. "Everybody just kind of gasped and went silent. And I'm just focusing on getting these shots. [...] I took over 1,200 photos." The final image shows the eclipse just as the plane passes over the Snake River, separating Oregon from Idaho. It took close to a year after the flight for Carmichael to assemble the final print." 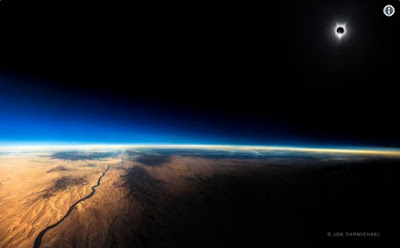