Desalination Brine ~ Side Effect or Opportunity?

The BBC spotlights Concerns over increase in toxic brine from desalination plants...


"Desalination plants around the world are pumping out far more salt laden brine than previously believed [...] The salty effluent is a by-product of efforts to extract fresh water from the sea. [...] The brine raises the level of salinity and poses a major risk to ocean life and marine ecosystems. [...] There's been a major expansion of desalination plants around the world over the past few years, with almost 16,000 now operating in 177 countries. It's estimated that these plants produce 95 million cubic metres of freshwater per day from seas and rivers -- equivalent to almost half the average flow over Niagara Falls. But the success of the technology is coming at a price. This new study estimates these plants discharge 142 million cubic metres of extremely salty brine every day, a 50% increase on previous estimates."

All challenging and yet therein also lies opportunities, including the mining and refinement of salts, minerals, and metals. 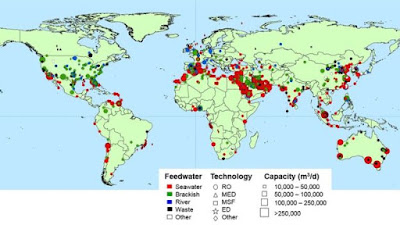