Join us this Monday, April 29, 2013 at 1pm at MIT Media Lab E14-633 6th floor lecture hall for Future Africa talk by Jonathan Ledgard, Director of Afrotech initiative at EPFL & Africa Correspondent at Large for The Economist. 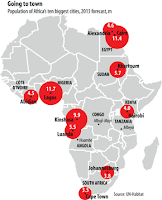 Ledgard will spotlight the technology choices Africa makes in the next decade will help determine whether it becomes competitive or unmanageable. This informal talk will overview Africa's security and environmental challenges, underline its economic potential, and get beyond ICT to identify areas where science will be decisive. He is director of the Afrotech initiative at EPFL in Switzerland. Afrotech seeks to pioneer massively scaleable high technologies into and out of Africa, including distribution of advanced knowledge on digital platforms, robotics, solar, and complexity thinking for future cities. Prior to joining EPFL Jonathan was a foreign political and war correspondent for The Economist. He joined the newspaper in 1995. Since 2004 he has been East Africa correspondent for the paper, with a reporting focus on risk and technology issues. He has published two novels, Giraffe (2006) and Submergence (2012).
Posted by Joost Bonsen at 10:03