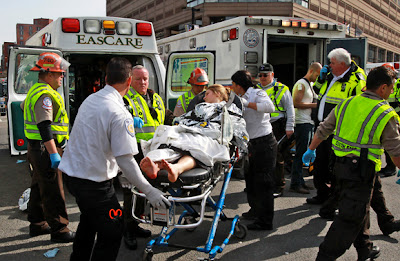 Dr Atul Gawande shares in the New Yorker a bit about how and Why Boston's Hospitals Were Ready...


"The bombs at the Boston Marathon were designed to maim and kill, and they did. Three people died within the first moments of the blast. More than a hundred and seventy people were injured. [...] Yet it now appears that every one of the wounded alive when rescuers reached them will survive. [...] The explosions took place at 2:50 P.M., twelve seconds apart. Medical personnel manning the runners’ first-aid tent swiftly converted it into a mass-casualty triage unit. Emergency medical teams mobilized en masse from around the city, resuscitated the injured, and somehow dispersed them to eight different hospitals in minutes, despite chaos and snarled traffic. [Indeed,] everything happened too fast for any ritualized plan to accommodate. [Nevertheless] nurses, doctors, X-ray staff, transport staff, you name it showed up as soon as they heard the news. They wanted to help, and they knew how. As one colleague put it, they did on a large scale what they knew how to do on a small scale. [...] Talking to people about that day, I was struck by how ready and almost rehearsed they were for this event. A decade earlier, nothing approaching their level of collaboration and efficiency would have occurred. We have, as one colleague put it to me, replaced our pre-9/11 naïveté with post-9/11 sobriety."

P.S. BostInno's Lauren Landry summarizes activity from many of the hospitals. And Tim Murphy writes in Mother Jones How Bombs in Iraq Saved Lives in Boston.
Posted by Joost Bonsen at 01:38