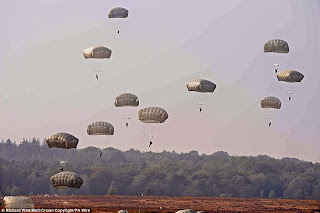 Seventy years ago this past week was one of the boldest and yet most disastrous battles of WWII in Europe when the Allies attempted to bypass German defenses by punching through the Netherlands in Operation Market Garden. Alas it was to become infamously known as A Bridge Too Far when bad weather, logistical hurdles, and under-anticipated Nazi resistance prevented capture of Arnhem, the last essential crossing. My own Dad and his family was caught in the cross-fire, which meant they lost almost everything, but at the same time this was understood by us Dutch as a tangible step towards ultimate liberation. That's why Robert Hardman's piece in the DailyMail is right: Seventy years on, Arnhem has never forgotten its debt to the thousands of British and Polish soldiers who gave their lives in ill-fated Allied plan to deliver final blow to Hitler...


"When it comes to commemorating those who made the ultimate sacrifice, there is nowhere quite like Arnhem. This historic Dutch town has never forgotten its debt to the 10,000 British and Polish soldiers who came from the sky in one of the great heroic failures of the Second World War. In September 1944, 70 years ago, with Paris liberated the Allies hatched a new plan -- codenamed Operation Market Garden -- to thrust north through Holland and on into Germany to deliver the final blow. Airborne troops would land by parachute and glider to capture a series of Dutch bridges and then cling on until a vast armoured column could arrive by road and reinforce them. The last bridge straddled the Rhine at Arnhem. But, in the end, the cavalry couldn’t get there in time. Through a combination of poor planning and bad luck -- the Germans had just parked a crack SS unit in the area -- the lightly-armed Allied troops ended up surrounded by overwhelming enemy forces. Of the 10,000 men who landed at Arnhem, just under 2,400 would make it out again after a vicious nine-day battle. The rest were killed or taken prisoner. [...] All the veterans were bowled over by the way they were received when they returned after the war. ‘It was a defeat and the Dutch lost everything yet they could not have done more for us,’ Colonel John Waddy, 94, the senior surviving veteran of Arnhem, told me at his Somerset home. ‘But then it was a unique battle because we were fighting alongside them in their own houses. And afterwards, they helped hundreds of us escape.’ [...] The true legacy of Arnhem is [...] a new organisation called the Arnhem Fellowship. Run on a shoestring by Dutch and British volunteers, it seeks to ensure that this precious bond of friendship continues after the last of the veterans have gone. [...] There is a magic about Arnhem. Perhaps it explains why, all these years later, so many veterans have made one last wish. ‘They often ask if they can have their ashes buried here, next to their comrades,’ says Gerrit Pijpers, a retired Dutch air force officer who has helped to organise ceremonies here for years. ‘They were only here for nine days, but they feel that this is home.’ It certainly is." 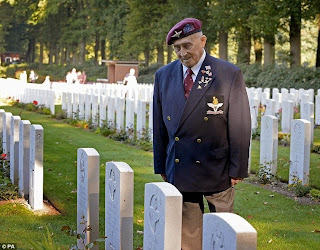