The Economist surveys The Pacific Age including the dramatic re-emergence of Asian economies and related trade with the Americas...


"The refrain, “The Mediterranean is the ocean of the past, the Atlantic is the ocean of the present and the Pacific is the ocean of the future,” first heard more than 100 years ago, is still repeated today. Yet exactly half a century after Japan “rejoined the world” (in the phrase of Ian Buruma, a writer) by hosting the Olympics in 1964, the Pacific Age has now clearly arrived. Japan’s economic power may have peaked 25 years ago, but it produced a trans-Pacific competition that now has America and China vying with each other for the title of the world’s largest economy (at purchasing-power parity). All three Pacific nations trade vigorously with one another." 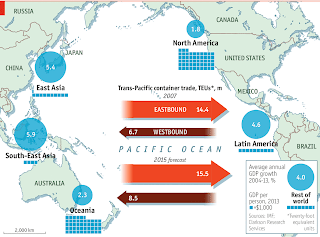