Superstorm Sandy -- two years ago, this past two weeks or so -- exceeded expectations and caught much of NYC and our American eastern seaboard surroundings short. Surge flooding, power loss, transit disruption, property damage, and more. Watch the docus to get a sense of scale and ferocity... The NYC Comptroller has upped estimates of property at-risk and the NYC leadership are on the ball pushing for change. DotEarthling Andrew Revkin spotlights NYC's softer relationship with the sea and especially NYTimes colleague Alan Feuer's Building for the Next Big Storm ~ After Hurricane Sandy, New York Rebuilds for the Future...


"In the next four decades, scholars say, sea levels are expected to rise by as much as 30 inches, and if the worst projections come to pass, about 800,000 city residents could find themselves living with the threat of being swamped. According to an insurance report commissioned by the city, if New York suffers another storm like Sandy in the early 2050s, when ocean levels and the population are likely to be higher, it could cause $90 billion in damage -- almost five times the cost of the initial storm."

Some radical new thinking is needed about coastal flood resilience, defence-in-depth, room for the water, more savvy infrastructure, and more... 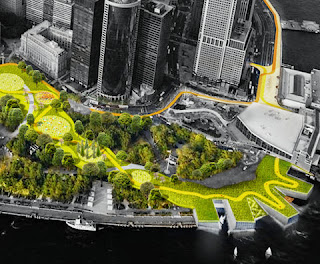