Rethinking the Map ~ Emergent US Megaregions

NYTimes piece by Parag Khanna on A New Map for America spotlights how the lower 48 could be realigned into seven megaregions...

"America is increasingly divided not between red states and blue states, but between connected hubs and disconnected backwaters. [...] Federal policy should refocus on helping these nascent archipelagos prosper, and helping others emerge, in places like Minneapolis and Memphis, collectively forming a lattice of productive metro-regions efficiently connected through better highways, railways and fiber-optic cables: a United City-States of America.  Similar shifts can be found around the world. Despite millenniums of cultivated cultural and linguistic provinces, China is transcending its traditional internal boundaries to become an empire of 26 megacity clusters with populations of up to 100 million each, centered around hubs such as Beijing, Shanghai, Guangzhou and Chongqing-Chengdu. Over time these clusters, whose borders fluctuate based on population and economic growth..." 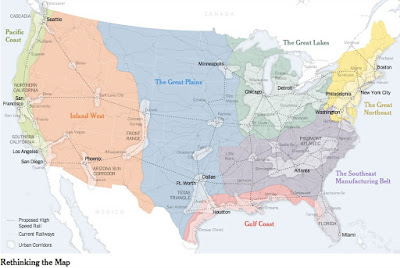