Jon Miltimore in FEE writes about social psychologist Jonathan Haidt's attempts to understand and explain human morality and, in particular...


"...the five primary categories that serve as our moral foundation:

"What Haidt found is that both conservatives and liberals recognize the Harm/Care and Fairness/Reciprocity values. Liberal-minded people, however, tend to reject the three remaining foundational values -- Loyalty/betrayal, Authority/subversion, and Sanctity/degradation -- while conservatives accept them. It’s an extraordinary difference, and it helps explain why many liberals and conservatives in America think “the other side” is bonkers." 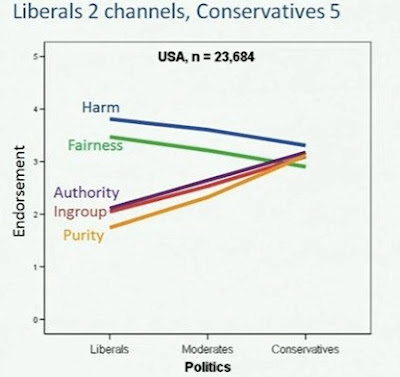