Everyone's seen these heartwarming images of canine companions spotted (and later rescued) from post-quake, tsunami-ravaged Japan... Japan Earthquake Animal Rescue and Support are among the organizations saving hundreds of similarly lost animals. Another key element, though, is the role of specialty animal assistants. In a CNN piece, Rescue in Japan as 2 pulled from rubble, they spotlight the role of rescue dogs...

"Along with emergency workers searching the worst stricken areas, specially trained dogs are taking part in the effort. "There's a lot of technical gear, obviously: the listening devices, the cameras, all of them help to locate people. But at the end of the day you can't beat a dog for hitting the scent of a human being," Rob Furniss, a British canine search specialist who is in Japan, told CNN. The dogs are so highly trained, they're able to block out the scent of a dead body and pick up only on someone who's alive. They pounce onto rubble, working their way along jagged, uneven piles as they search. When they get minor wounds in the effort, they get stitched up without a whimper, and soon get right back to work." 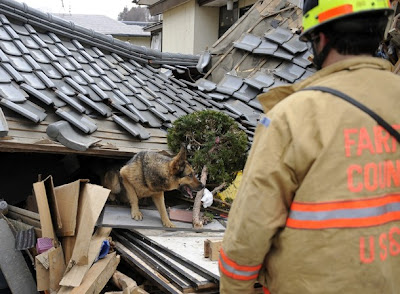 And anyone interested in Japan and dogs must necessarily discover the remarkable story of Hachikō, the ultra-loyal Akita who faithfully waited at the train station each evening for a decade following his owner's passing.
Posted by Joost Bonsen at 21:43