Honoring Hibakusha ~ Beyond the Unfathomable 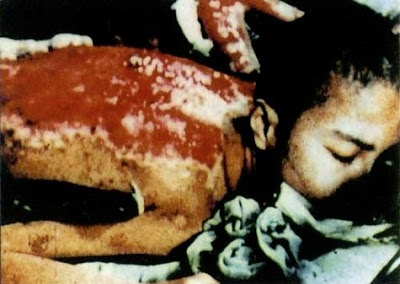 David McNeill and Miguel Quintana write in the Independent that Atom-bomb survivors fear new generation face familiar discrimination about the Hibakusha -- survivors of A-Bombs in Hiroshima and Nagasaki -- one of man's most inhumane actions in recorded history...

"Like millions of other Japanese, Hiroko Tanaka has been glued to television footage of workers frantically trying to prevent disaster at a crippled nuclear plant. She has more reason to be worried than most: as an atom-bomb survivor, or hibakusha, Mrs Tanaka knows the impact of radiation first hand, and she has faced discrimination all her life in a country where little is still known about its effects. She waited 50 years before applying for the government certificate that proves she is a surviving victim of the 1945 US atomic bombing of Hiroshima. "Radioactivity is so scary because it's invisible" [...] Japan's roughly 227,000 hibakusha have suffered higher cancer rates as a result of the fallout from the twin bombings of Hiroshima and Nagasaki. The drama unfolding at the Fukushima nuclear complex fills many with growing alarm. [...] "The hibakusha faced an extreme degree of discrimination based on unfounded ideas," he said. "If the public was given a clear explanation of the effects of radiation, this problem would no longer exist."