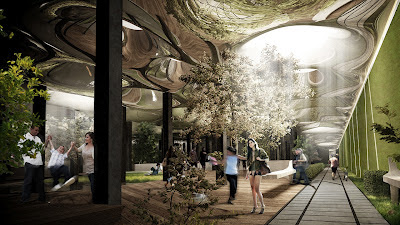 Thanks to MIT alum friend John Mills for spotting the LowLine on Fast Co.Design. They just raised $155,186 on KickStarter from 3,300 backers and are now able to prototype-demo the idea!

"We want to transform an abandoned trolley terminal on the Lower East Side of Manhattan into the world’s first underground park. It will be a new kind of public space, using solar technology for natural illumination, and cutting edge design to capture and highlight a very special industrial space. {...] This "Delancey Underground" space is quite large, by New York standards: 60,000 square feet, or 1.5 acres -- nearly the size of Gramercy Park. It was built in 1903 as a trolley terminal, for streetcars traveling over the Williamsburg Bridge, and has been out of operation since 1948. We fell in love with the site because of its architectural details: old cobblestones, crisscrossing rail tracks, vaulted 20-foot ceilings, and strong steel columns."