Very interesting to hear first from MIT Sloan Fellow Otar Bubashvili and to now read and see more about Lazika, the new Georgian coastal city development just north of Poti and south of Anaklia... Here's the larger map of Georgia with the Lazika location (unmarked) being in the coastal middle... 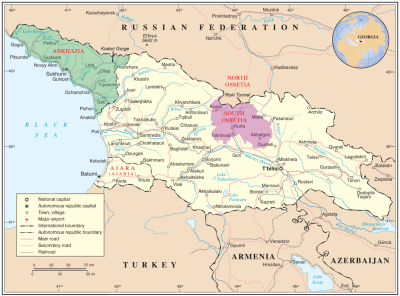 More generally, I'm quite interested in such new cities, including contemporary examples such as Iskandar in Malaysia, Rawabi in Palestine, Greater Aqaba in Jordan, Masdar in Abu Dhabi, City of Silk proposal in Kuwait, and the very bold Al Noor proposal between Yemen and Djibouti.  P.S. Ellen Barry writes in the NYTimes On Black Sea Swamp, Big Plans for Instant City, quoting the Georgian President...

"We need a big breakthrough if we are not to have poverty anymore.” The breakthrough, he said, would be a brand-new city and maritime port on the coast [...] an idea now common in China, which has erected dozens of cities to house its flood of rural migrants, but highly unusual for Europe. [This integrates] the idea of a “charter city,” with distinct regulatory and judicial systems that could attract foreign investors to build factories. “This idea came to us -- why can’t we do that in Georgia?” he said. “We looked out and we saw there is free space on the Black Sea coast."