In light of supermoon, it's high time we look more closely at our satellite's cataclysmic past;-) Ian Sample of the Guardian summarized latest NASA research a few years ago...


"Some regions of the moon are so pocked with craters they have reached what planetary scientists call "saturation equilibrium", where each additional crater wipes out an older one, so the number of craters remains the same. [...] A team led by James Head at Brown University in Providence, Rhode Island, used an instrument called a laser altimeter on the Lunar Reconnaissance Orbiter to map craters on the moon. The instrument bounces laser pulses off the lunar surface every 25 metres as it hurtles overhead. By measuring how long each laser pulse takes to bounce back to the spacecraft, scientists can map the surface contours of the moon to a vertical accuracy of 10cm." 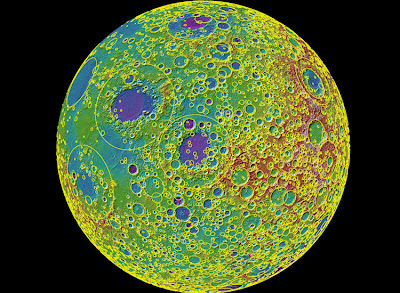