Penis vs Police ~ Freedom of Expression in NL

Peter wants his penis back writes Eric Beauchemin on RNW...


"A row has broken out in a village in the southern Dutch province of Brabant between an artist and the police over a 3-metre high wooden penis. The artist made the sculpture and attached a sign to it with the name of a policeman. He was protesting against the policeman for searching his daughter for drugs. The officer regarded the huge penis as insulting and late last week the police confiscated it. The artist, Peter de Koning, is furious. He says the action violates his right to freedom of expression. He is demanding that the police give him back his penis." 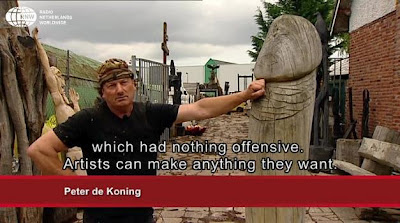