I want to revisit the big idea of Accelerated Convergence -- figuring out how historically, and how going forward, countries begin to grow rapidly and catch-up with the most prosperous. Check out these data traces from Gapminder which show first Australia, then Canada, then Monaco, then Sweden, then Japan, then South Korea, and now China all shifting from prior GDP/capita trajectory into accelerated convergence mode and then (except for China, yet) converging in GDP/capita with United States... 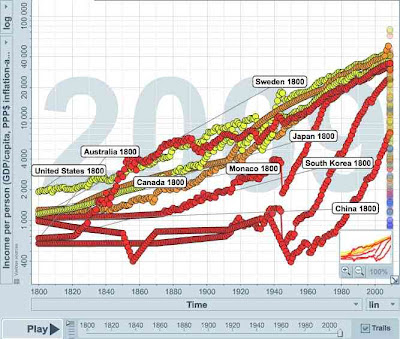 Who else can do this in the future? And what if all countries began converging at the average Japan+SK+China rate? Where would we be by 2050?
Posted by Joost Bonsen at 11:25