"Back in the 1960s and 1970s, the Massachusetts Institute of Technology was in the university-building business. [...] More than a generation later, MIT is at it again. [...] MIT is not stamping its name on campuses overseas. Instead it has seemed content to be a less-showy, largely silent partner in its international ventures. [...] these upstart institutions are being built in the spirit of MIT's motto, Mens et Manus, or Mind and Hand. They are meant to have real-world impact. [In the words of our new President...] "We cannot replicate MIT anywhere else," says Mr. Reif, a former provost and longtime faculty member. "It took us 150 years to get what we've got."

It's a fascinating piece, missing as much as it reveals, including essential history and failures. But read the whole thing! 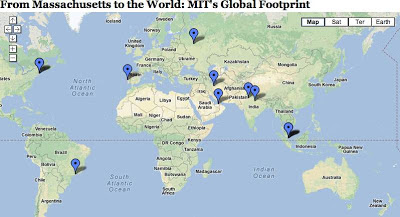