Brilliant service Hangover Heaven in Las Vegas is the subject of Der Spiegel piece Curing the Symptoms of Overindulgence in Las Vegas by Astrid Langer...


"The hangover truck is the brainchild of Jason Burke, a 42-year-old anesthesiologist who worked in Las Vegas hospitals for seven years before going out on his own and starting up his "Hangover Heaven" practice. Since then, he's been driving his massive, converted bus up and down the Strip treating people who've drunk themselves senseless. [...] Burke came up with the hangover bus idea because he and his wife are themselves wine and grappa lovers and enjoy going to wine tastings on the weekend. After one of these outings, it occurred to him that, after being anesthetized, many patients exhibit the same symptoms as people with hangovers. "I thought to myself that maybe the same medications would work on hangovers too," he says. So he tried the treatments out on his friends -- with stunning results. He then created a business plan, bought a bus and turned it into a mobile sick ward with leather seats and huge televisions. The state of Nevada's health department was a bit taken aback by the idea, Burke says, but it still approved it. Now he can simultaneously treat some 20 patients at a time in the bus." 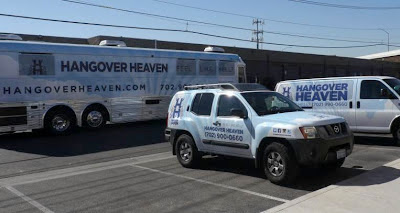