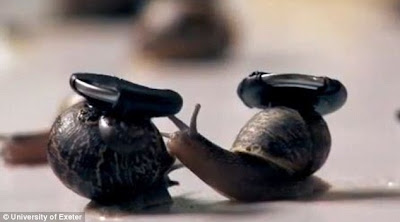 Prof Dave Hodgson, an ecologist at the University of Exeter, and his team embarked on a Slime Watch to find that...


"...snails will travel distances of up to 25 metres in a 24-hour period, and seek out areas of shelter, such as long grass, trees or objects, including dogs' toys, left in the garden overnight. The four researchers from Exeter University also discovered that snails move in convoys, piggy-backing on the slime of other snails to conserve energy. It is thought that a snail could use up to 30 per cent of its energy in slime production alone. The study was commissioned by the Be Lungworm Aware campaign as a resource for dog owners, whose pets are at risk from a potentially fatal parasite spread by slugs and snails..."

(See also pieces in Neatorama and at DailyMail)
Posted by Joost Bonsen at 16:21