"The City of Copenhagen has implemented this double railing simply as a convenience for the cyclists who stop here. A high railing to grasp with your hand and a foot railing for putting your foot up..." 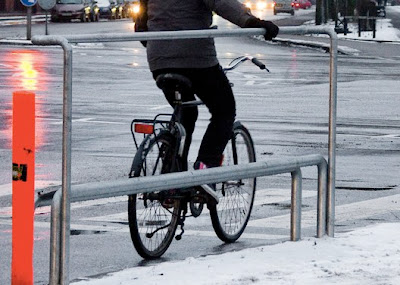 Mark Wagenbuur from BicycleDutch has numerous posts on cycle path details, including Drainage in NL...


"With so many people cycling in the Netherlands and with the average amount of precipitation in their country, the Dutch need a system that keeps the infrastructure dry without endangering all those people cycling. And of course the Dutch have such a system. Key difference to some of the other systems of the world is that the openings for rain water to get into the sewer system are not horizontally in the street surface, but vertically set in the kerbs [...] As a cyclist you do not have to ride over these openings that way and that makes all the difference."

David Hembrow's View From the Cycle Path spots many details, including latest piece on Bollards, both horrible and acceptable examples...


"Bollards appear primarily where cycling routes meet driving routes. They're also used to prevent minor roads from being used for through journeys (segregating modes without a cycle-path and helping to unravel driving routes from cycling routes) and in other places, for example to discourage parking of cars where they are not wanted."

Latest designs include flexible bollards... And this David Hembrow piece on Angled Curbs...


"Parallel kerbs can be quite dangerous for cyclists. A slight lapse of concentration and you can be off your bike, and possibly injured badly [...] The kerb shown here is one of many "forgiving" 45 degree kerbs in use in Assen. These kerbs make it possible to cross from the cycle path to the pedestrian path without falling from your bike. They reduce the risk of injury due to a lapse of concentration." 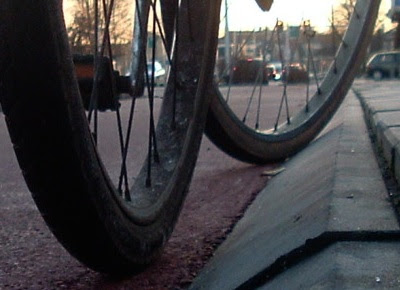