Glenn Hodges writing in National Geographic spotlights a paradigm shift in Geology, the discovery by former school teacher Harley Bretz of the cataclysmic flooding which created the channeled scablands of Washington in northwest USA...

"Bretz’s research was thorough [when he first presented it in 1927], and his map of the channeled scablands was so accurate that it’s a virtual tracing of modern-day satellite images, creating the immediate impression of channeled floodwaters. But his audience [at a DC geologists conclave] -- none of whom had visited, much less studied, the scablands -- was having none of it. Bretz’s hypothesis was not just “wholly inadequate,” in the words of one critic, but “preposterous” and “incompetent." 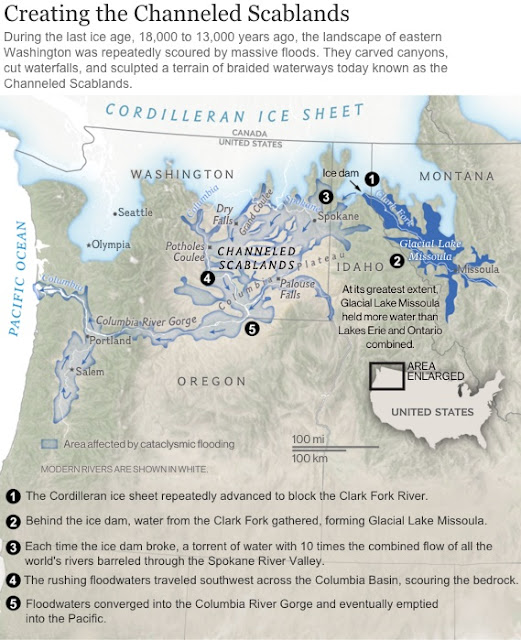 "For some of Bretz’s most stubborn critics, even eyewitness experience wasn’t enough. Bretz’s arch-adversary, Richard Foster Flint, a Yale geologist who remained a premier authority in the field until the 1970s, spent years studying the scablands and resisted Bretz’s theory until he was virtually the only one left who did. He finally acknowledged the scablands flooding (grudgingly, with a single sentence in a textbook in 1971), but as philosopher Thomas Kuhn observed, new scientific truths often win the day not so much because opponents change their minds, but because they die off."

Finally, here's a computer simulation of how it might have happened...
Posted by Joost Bonsen at 15:06