The Atlantic spotlights What Would the Solar Eclipse Look Like From the Moon?


"In 1989, [artist Pat] Rawlings was working on illustrations for a collection of children’s science books by the science-fiction writer Isaac Asimov. Using acrylics, he painted a view of a solar eclipse as seen from the moon, and named it after the date when the next eclipse would cross over the continental United States: August 21, 2017. This week, Rawlings tweeted a photo of the painting, which is at the top of this story. “I actually thought 28 years in the future tourists might watch the eclipse from the Moon,” he wrote. “Sigh.” 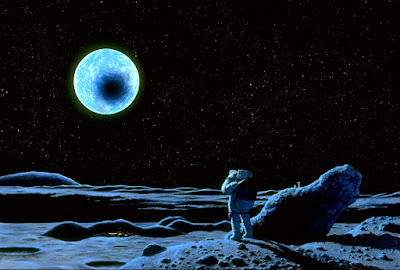 "Scientists at UW–Madison’s Space Science and Engineering Center (SSEC) observed the eclipse through the eye of one of the world’s most advanced weather satellites, GOES-16. The eclipse images from the satellite were taken at a rate of one every five minutes. Stitched together, the images show the shadow of the moon tracking west to east across the continental United States."

Plus here's a previous eclipse seen in March 2016 over ASEAN + Pacific region via the Himawari-8 Spacecraft in Geostationary orbit!
Posted by Joost Bonsen at 00:21