Roberto Stefan Foa and Yascha Mounk in The Signs of Deconsolidation in the Journal of Democracy share evidence of a global pattern of disaffection with democratic systems...


"Americans’ dissatisfaction with the democratic system is part of a much larger global pattern. It is not just that the proportion of Americans who state that it is “essential” to live in a democracy, which stands at 72 percent among those born before World War II, has fallen to 30 percent among millennials. It is also that [...] a similar cohort pattern is found across all longstanding democracies, including Great Britain, the Netherlands, Sweden, Australia, and New Zealand. In virtually all cases, the generation gap is striking, with the proportion of younger citizens who believe it is essential to live in a democracy falling to a minority." 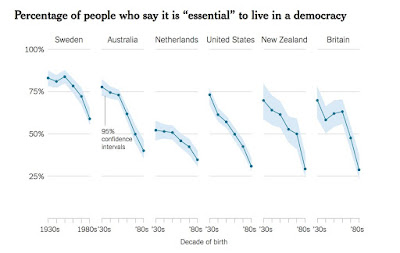 "What is more, this disaffection with the democratic form of government is accompanied by a wider skepticism toward liberal institutions. Citizens are growing more disaffected with established political parties, representative institutions, and minority rights. Tellingly, they are also increasingly open to authoritarian interpretations of democracy. The share of citizens who approve of “having a strong leader who does not have to bother with parliament or elections,” for example, has gone up markedly in most of the countries where the World Values Survey asked the question -- including such varied places as Germany, the United States, Spain, Turkey, and Russia" 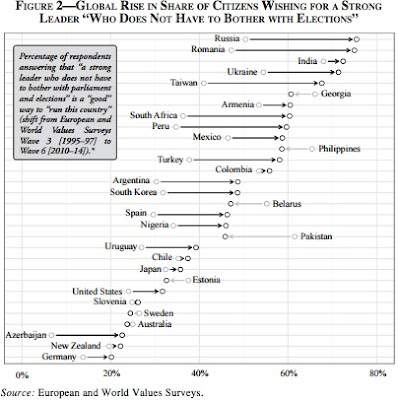