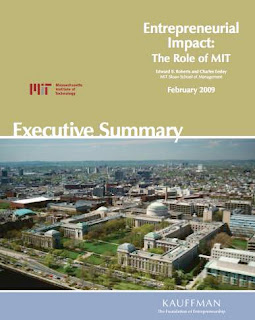 Interesting to see my MIT colleagues Ed Roberts and Chuck Eesley authoring a Kauffman Foundation Study [Which] Finds MIT Alumni Companies Generate Billions for Regional Economies. Here's the MIT News Office trumpeting the word. Some of the assertions are glorious...

One caveat, however -- since I ran the MIT Founders Project in the 1990s -- which was an actual direct count census -- and I have some sense of how many companies there really are co-founded by MIT-related people, I think the Roberts & Eesley so-called direct extrapolation technique substantially overestimates things (by maybe a factor of 3x or 5x). But I'm willing to be convinced otherwise.
Posted by Joost Bonsen at 18:23