John Follain writes in the Sunday London Times that Face transplant patient Isabelle Dinoire reveals her new life. She has rediscovered the will to live since having the first face transplant ever in human history. But it's amazing it happened at all. With her face inadvertently ravaged by her pet dog and confronted with the prospect of poor, incomplete reconstruction at best, she said... 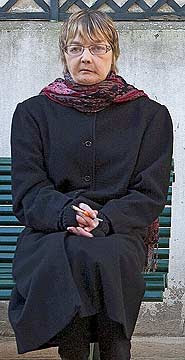 meaning she preferred to die. At 9pm one evening, a doctor suggested that they carry out a much more complex, and risky, transplant instead. "You think about it," he said. [...] Dinoire quickly signed the form agreeing to the transplant. "I knew what the risks were. But it was the only way of staying alive," she said. From then on, she kept harassing the medical team for news, a sign of determination that made doctors even more certain that she was psychologically fit for the transplant, despite her suicide attempt. "She became the engine of her own treatment, pushing us, asking us what the experts were up to," the surgeon, Professor Bernard Devauchelle, recalled. "She gave us strength, because a couple of times we felt discouraged. I worried the team would lose motivation." The fact that the dog had made such sharp, neat bites to her flesh was another reason for trying a transplant."

This is yet another area where so-called "medical ethicists" were forces of stagnation and superstitious luddite backwardness. In the face of this, Dinoire's doctors fought hard to...

"...overcome resistance from French medical authorities and obtain permission for the transplant. Critics worried that a face transplant was morally questionable; it wasn’t a matter of life or death, as with the heart or kidneys, they argued. A French ethics committee had the previous year estimated that the risks of surgery far outweighed the benefits. Dinoire’s doctors countered that they simply couldn’t leave her as she was and that the transplant was the best solution they could try."

The difficult surgery was amazing...

"He stitched the blood vessels, which have a diameter of just 1.5 millimetres, under the microscope. “You do two or three stitches on each vessel, using two small clamps to stop the blood flow, then remove the clamps to allow the blood to flow again,” Devauchelle remembered. “The best moment was seeing the skin grow pinker and pinker. And the lips -- they became the colour of life, they swelled up. It was like a total rebirth." The surgery included transplanting 20 muscles and reconnecting hundreds of nerve endings."

The rest of the story is most worth reading, including Dinoire's struggle to think of it as "her face" and thoughts about about the donor, the tremendous medical learnings, the psychological dimensions of recovery, and more. Absolutely human and totally epic!
Posted by Joost Bonsen at 18:39