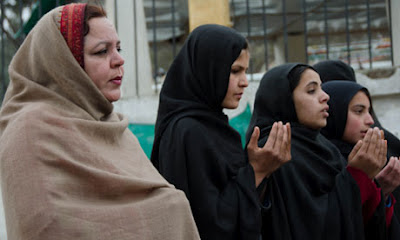 Rina Saeed Khan writes in the Guardian Weekly about the valley where girls are the future...


"In a rundown building in the mountain village of Sijban, girls sit at their desks, hair loosely covered in white or black scarves, staring raptly at their teacher. They say they want to become either doctors or teachers when they grow up. This is the one government primary school for girls in the Swat valley that was spared destruction by the Taliban. Their headteacher, Gul-e-Khandana, is no ordinary teacher -- she stood up to the Taliban and managed to save the school [...] now the Taliban have left the valley, enrolment is increasing. "More girls are coming back and many want to go on to college. There is a change; parents are willing to encourage their daughters. As for the girls, you can see the happiness on their faces, they are so happy to be back in a proper school again. Many lost almost two years of their studies." The Taliban destroyed more than 400 of the 1,576 schools in Swat. "Seventy percent of them were girls' schools," [...] as the conflict with the government intensified they started destroying both boys' schools as well as girls' schools. It was a terrible time. How can you build a nation without education?" [...] Gul-e-Khandana believes that girls are the future for Pakistan. "Above all, girls must be educated," she says. "When one girl is educated, she educates her entire household. The role of women is very important in our society -- it is they who can change our way of life for the better."