Voice of the People ~ Hong Kong vs Politburo...

The Economist shares the voice of the people versus Politburo from one of the two relatively free places in Mao's China...


"Colonial-era social freedoms still apply in Hong Kong, and pro-democracy groups in the territory have staged protests on July 1st ever since the first anniversary of the reversion to Chinese sovereignty 15 years ago. [...] Hong Kong officials were at pains to prevent Mr Hu from encountering any disaffected citizens, whose complaints range from Hong Kong’s growing wealth gap to the mistreatment of dissidents in mainland China to [...] the crushing of the Tiananmen Square protests in 1989. [...] Mainland Chinese media imposed a virtual news blackout on the demonstration." 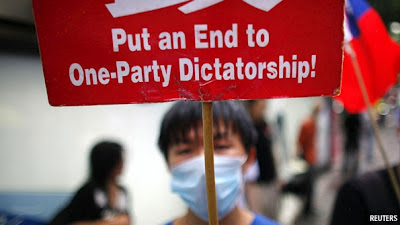