The Globe's Scott Kirsner suggests a great idea, an Innovation Trail as alternative to the historical Freedom Trail...


"I’m proposing a different kind of walk though Boston and Cambridge: an Innovation Trail that focuses on the past, present, and future of innovation here. We’ll always have Paul Revere’s place and Old Ironsides, but what about the incubator where Thomas Edison and Alexander Graham Bell tinkered or the world’s only “Walk of Fame” for entrepreneurs? The Innovation Trail picks up just a few years after the Freedom Trail leaves off: The newest spot on the old trail is the Bunker Hill Monument, built in 1842. The oldest stop on this new trail is the Ether Dome at Massachusetts General Hospital, where surgical anesthesia was first demonstrated successfully in 1846." 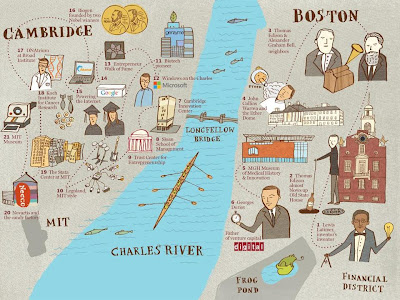 While Scott offers more detail in his blogpost, in my opinion he overlooks a few especially key places, including...
Also, it's worth looking at the Cambridge Innovation Map.
Posted by Joost Bonsen at 18:57