"Rallying around the Fourth of July holiday, several Web sites have come together to take part in a nationwide protest over the National Security Agency's surveillance program. Organized by the nonprofit Fight for the Future, thousands of sites -- including some heavy-hitters like Mozilla, Reddit, WordPress.org, and 4chan -- will be staging online protests. Rather than going black, like many sites did during the 2012 protests of Congress' Stop Online Privacy Act, or SOPA, these sites will prominently display a Fourth Amendment banner. The banner will quote the text of the amendment, which says, "The right of the people to be secure in their persons, houses, papers, and effects, against unreasonable searches and seizures, shall not be violated." 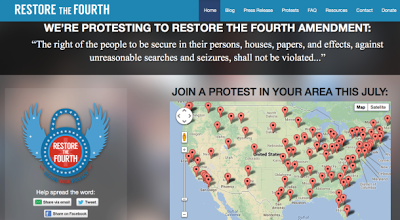