Into the Storm ~ Final Days of Tallship Bounty 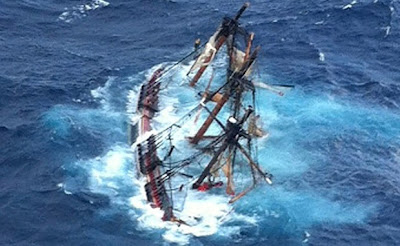 Mario Vittone at gCaptain shares his interactive timeline of Bounty’s last voyage before sinking at sea caught up in Superstorm Sandy...


"Bounty should have never left New London. No one disagrees. But she did. What happened next -- at least what the surviving crew say happened next -- should be studied. There are lessons in the last voyage of Bounty for all of us. [This timeline] was created using the testimony of the surviving crew along with all other publicly available information on the sinking. It covers (primarily) the time Bounty left New London on October 25th until she sank on the morning of October 29th. Seeing it this way -- hour by hour as the trip unfolded -- provides a look into human nature and decision-making that we don’t get if we stay focused only on the mistake of making the trip at all. It shows how people -- even your people – might react in a crisis. It looks head-on into the normalizing of hazards and acceptance of risk with no gain. Watching the events unfold on Saturday, you can sense the crew’s tunnel vision and denial. And trying to figure out why it took so long to call for help may even infuriate some of you. It did me. Still, this is a wreck you want to look at."