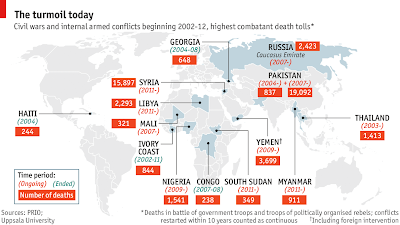 The Economist reveals about Civil Wars, How to stop the fighting, sometimes...


"Ending civil wars is hard. Hatreds within countries often run far deeper than between them. The fighting rarely sticks to battlefields, as it can do between states. Civilians are rarely spared. And there are no borders to fall back behind. [...] Yet civil wars do end. Of 150 large intrastate wars since 1945 fewer than ten are ongoing. Angola, Chad, Sri Lanka and other places long known for bloodletting are now at peace, though hardly democratic. And recently civil wars have been ending sooner. [...] So far, nothing has done more to end the world’s hot little wars than winding up its big cold one. [...] More conflicts ended in the 15 years after the fall of the Berlin Wall than in the preceding half-century [...] Until 1989, victory for one side was common (58%). Nowadays victories are much rarer (13%), though not unknown [...] The main reason for jaw-jaw outpacing war-war is a change in the nature of outside involvement. In the Cold War neither of the superpowers was keen to back down; both would frequently fund their faction for as long as it took. Today outside backers are less likely to have the resources for such commitment. And in many cases, outsiders are taking an active interest in stopping civil wars. [But] the motives vary." 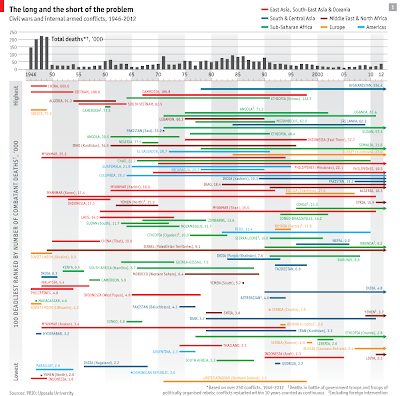