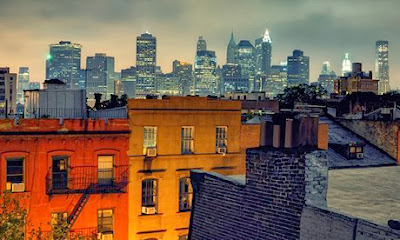 Thanks to PD Smith for reviewing The New York Nobody Knows by William B Helmreich in the Guardian...

"Sociologist William B Helmreich was born and grew up in New York City. As a boy, he and his father played a game called "Last Stop". It involved riding the subway from the station at 103rd Street near their Upper West Side apartment to the last stop on the line. Then, like intrepid explorers, they would discover the area's secrets on foot. (Helmreich's father died in 2011 at the age of 101.) In a sense, this book is a continuation of that urban game. To write The New York Nobody Knows, Helmreich walked 6,048 miles, covering almost every block in the city's five boroughs: Queens, Manhattan, Staten Island, Brooklyn and the Bronx. It took him four years, walking an average of 1,512 miles a year. He wore out nine pairs of shoes. Helmreich admits that "you have to be a little crazy to explore the city as I did". But big cities do that to you. [...] It's refreshing to read a book that celebrates so unreservedly the ethnic diversity of a city and entirely fitting that it should be about a metropolis that has always been defined by its cosmopolitan culture. For Helmreich, the city's diversity is the well-spring of its success."

Be sure to also check out PD Smith's own book, City: A Guidebook for the Urban Age.
Posted by Joost Bonsen at 10:42