The USAToday has an interesting story today entitled A Bounty Sprouts in the City with MyFarm Enterprise about...

"...an enterprise that puts vegetable gardens into people's backyards, then sends a gardener once a week to do upkeep and harvest, leaving a weekly basket of fresh produce behind." 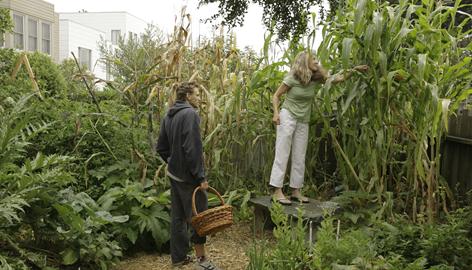 "MyFarm charges customers $800 to $1,200 to install the garden. Then for a weekly fee that varies according to the size of the plot, a gardener weeds, tends and harvests the garden, leaving the owner with a week's worth of vegetables. For time-starved residents, MyFarm is a way to get organic produce grown steps from their kitchen without having to touch a trowel. For yardless neighbors, it lets them effectively buy a share of their neighbors' gardens. What makes Paque's venture different is that he sees all the gardens as merely components of one large farm."

That's an innovative idea. It will be interesting to see how it works out.