Beautiful Transplant ~ Most Extensive Facial Yet...

Breathtaking progress in the world of medical transplantation and reconstructive surgery! The DailyMail shows the case of...

"Richard Lee Norris, 37, who suffered horrendous injuries in a gun accident in 1997, is recovering well and already brushing his teeth and shaving after last week's surgery, according to doctors at the University of Maryland Medical Center in United States. Pictured (left) is Mr Norris before his accident, (center) shortly after his accident and (right) as he now looks following his face transplant." 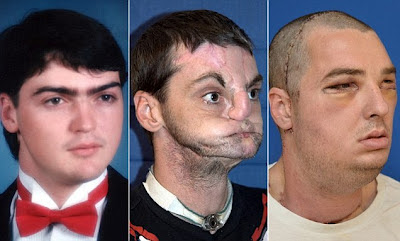 Kudos to lead Dr Eduardo Rodriguez and the whole surgical team! See also my earlier write-up on Connie Culp and Isabelle Dinoire plus also the Spaniard "Oscar". Also, here's AlJazeera coverage of the press conference and more backstory...
Posted by Joost Bonsen at 21:46