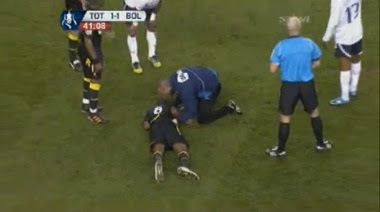 CNN reports how Congolese-English footballer Fabrice Muamba was "in effect dead" for 78 minutes after he collapsed from cardiac arrest on the pitch this past week...

"[Bolton's club Dr. Jonathan] Tobin said he and the other paramedics who rushed onto the field treated Muamba for a total of 48 minutes on the pitch and en route to London's Chest Hospital, but it took a further 30 minutes to restart the midfielder's heart. [...] "In effect he was dead in that time," Dr. Tobin said. "Fabrice was in a type of cardiac arrest where the heart is showing lots of electrical activity but no muscular activity. "It's something that often responds to drugs and shocks. Now heaven knows why, but Fabrice had, in total, 15 shocks. He had a further 12 shocks in the ambulance." [...] The desperate effort to save Muamba was assisted by an off-duty cardiologist, who was in the stadium watching the game as a fan and was allowed onto the pitch. Dr. Andrew Deaner suggested Muamba be transferred to the London Chest Hospital, where he works, and administered vital drugs to the player in the ambulance. He says the fact Muamba is responding appropriately to questions and is able to make jokes within five days of suffering such major heart trauma is nothing short of astonishing. [...] "If you're going to use the term miraculous, I guess it could be used here," he said. Deaner also revealed he had been in to see Muamba a few hours after he woke up. "I whispered into his ear 'What's your name?'," he explained. When Muamba said his name Deaner continued: "I said 'I understand you're a very good footballer'. And he said 'I try.'"

"...consultant Cardiologist at London Chest Hospital, who was at the game as a fan, and ran on to the pitch to lend his expertise."