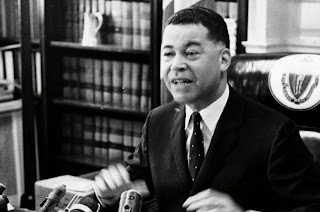 Very sad to hear that the groundbreaking Edward Brooke has passed away at age 95. He was not only the first African American popularly elected to the US Senate but did so as a Republican and a self-described "creative moderate" in Massachusetts. Read his Open Christmas Letter to the Racially Divided City of Boston from 1974.
Posted by Joost Bonsen at 13:28