The Economist has an article on Surveillance Technology: If Looks Could Kill surveying the latest in security systems for detecting suspect behaviors. Says the Economist:

"Many people would like to develop intelligent computerised surveillance systems. The perceived need for such systems is stimulating the development of devices that can both recognise people and objects and also detect suspicious behaviour."

Devices like lie detectors and these new systems I call Suspicion Engines. This is a blossoming innovation domain, and one of the topics in our MIT Neurotechnology Ventures class. And just yesterday, I met with Patrick Sobalvarro, the MIT alum co-founder

of Intellivid, which intelligently analyzes CCTV videostreams in retail stores for security and theft prevention. And another MIT alum friend, Malay Kundu, is building up StopLift, also a vision system doing retail security, but specifically targeting 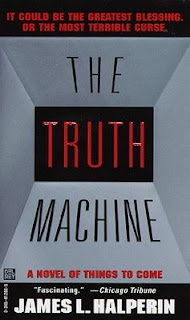 Indeed, it's the human-in-the-loop which is really important -- and why I call these systems Suspicion Engines -- they serve to spotlight the most suspicious behavior at a given time, thus boosting the odds that we sense and intervene in the face of malicious intentions.
Posted by Joost Bonsen at 12:23