There's tremendous xenophobia and anti-migrant sentiment rampant today in US and EU and elsewhere. This is extraordinarily unfortunate. And it's stunningly inconsistent -- and inhumane -- because all of us are either migrants ourselves or the heirs of immigrants, whether 1, 2, 5, 10, 20, 50, or 100 generations ago. ALL of us. As in: If they couldn't come, you wouldn't be here. And therefore the only logical, ethical and consistent stance to take on immigration is: Wide Open Doors. Alas today, because of the physical and legal barriers set up against migrants, they take great risks, with too often tragic results. Ordinary citizens can, however, act to improve the situation, even on a seemingly small or local scale. I'm especially moved by the experience of Rafael Quiroz and Violeta Cuesta who discovered the swollen 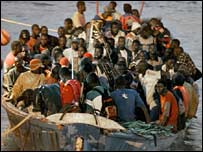 corpses of would-be migrants washed up on a beach near their home in southern Spain. As documented in the BBC article From Shipwreck to Solidarity, they said: "Enough is enough, we have to do something to help!" In their particular case, they try to help reduce the economic incentive for migration and they repatriated the remains of the lost migrants. But more generally speaking, there are endless possibilities for thinking creatively about migration and prosperity: skillbuilding, economic development, remittances, family planning, group savings, microfinance, and more. The BBC has surveyed this landscape admirably in their Destination Europe article and spotlights key geo-demographic facts. As they point out:

"Thousands of Africans try to make the journey to Europe each year as illegal migrants - risking people smugglers, deserts, sea crossings and the possibility of being sent home, all for the dream of a better life."

"Having migrated, many migrants send money home to family they have left behind. Billions of dollars each year is sent back to Africa from the diaspora around the world - in some cases making up a sizeable chunk of the home country's GDP."