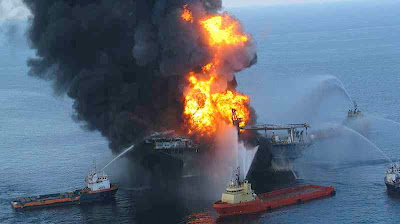 The BP-Transocean oil rig incident in the Gulf of Mexico is demanding the latest in environmental remediation methods as noted in the BBC's piece Robot vessels used to cap Gulf of Mexico oil leak...

"BP is using submersible vehicles, equipped with cameras and remote-controlled arms, to try to activate a blow-out preventer - a series of pipes and valves that could stop the leak. However, this was a "highly complex task" and "it may not be successful", said chief operating officer of BP's exploration and production unit, Doug Suttles. If the attempt fails the alternative is to drill a "relief well" intersecting the original well, but Mr Suttles warned that this might take months. BP has also brought in more than 30 clean-up vessels and several aircraft to spray dispersant on the oil floating on the surface. Bad weather forced the operation to be suspended at the weekend."