Free Thinker ~ The "Why I Left Islam" Blog Post... 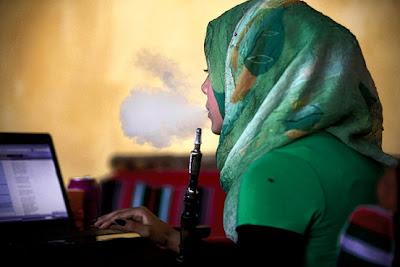 Thanks to Bret Stephens giving the Global View in the WSJournal when he champions Free Palestine! Writing about the predicament of blogger Waleed al-Husseini, Stephens asks a very legitimate question -- Why persecute a human for their exercise of freedom of speech? This is currently rather relevant because al-Husseini wrote a post titled "Why I Left Islam" from which Stephens shares the following excerpts...

"The pseudonymous Husseini makes no bones about his opposition to religions generally, which he says "compete with each other in terms of stupidity." But nothing seems to exercise his indignation more than the religion he used to call his own. Islam, he writes, is "an authoritarian religion that does not respect the individual's freedom of choice, which is easily noticeable from its barbaric verdicts such as stoning the adulterous, pushing homosexuals off a cliff and killing the apostates for daring to express a different viewpoint." And that's just Husseini getting started. The essay proceeds by way of a series of questions, such as "Is Islam a religion of tolerance?" Answer: "The sacred texts of Islam also encourage blatant war and conquest of new territories." What about equality? "Islam has legitimized slavery, reinforced the gap between social classes and allowed stealing from the infidels." Women's rights? "I have a mother, a sister and a lover and I cannot stand for them to be humiliated and stigmatized in this bone-chilling way." The prophet? "A sex maniac" who "was no different than barbaric thugs who slaughtered, robbed and raped women." And so on."

All this would be a perfectly reasonable exercise of free speech in any modern, civilized country. People have said far worse about the equally horrific Christian and Jewish and other cultist "traditions." Except the alleged author of this blog post is now in detention in the West Bank, Palestine, stripped of civil rights, prevented from receiving either visitors or any legal representation, and threatened by locals with being "burned alive." Judge for yourself how irrational, stupid, and backwards such responses are. Horrible.
Posted by Joost Bonsen at 00:48