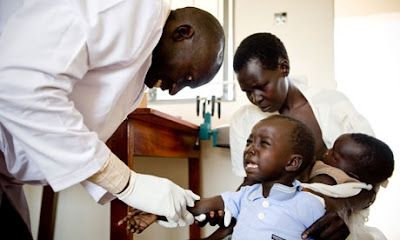 Robin McKie writes in the Guardian Observer that Focus on HIV prevents us from curing a billion people...

"More than a billion victims of some of the world's most pernicious ailments could be treated with drugs that have annual costs of less than [US$0.50] a person. However, the plight of these people is being neglected because resources are being monopolised in developing countries by three major conditions -- HIV, malaria and TB -- even though these diseases infect a much smaller fraction of their populations. This is the warning of experts who say an opportunity to rid the planet of some of its worst scourges -- including sleeping sickness, elephantiasis and river blindness -- is being missed because of distorted health policy goals. "This is not the fault of pharmaceutical companies," said Professor David Molyneux of the Liverpool School of Tropical Medicine. "They have made available billions of doses of key drugs. Our problem is that we are not providing the impetus or the means for getting these drugs to disease sufferers. "People at policy level think that only malaria, TB and HIV exist in the third world. This is not true. Neglected tropical diseases as a whole [...] cause more of a burden than these big-name diseases but are being ignored."

We need more civic competency and holistic systems-solutions.
Posted by Joost Bonsen at 11:31