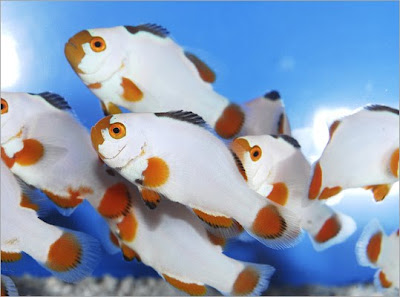 "The ornamental fish industry is a billion-dollar enterprise in the United States, but the sale of saltwater aquarium fish has historically made up only a small part of that trade. Saltwater aquariums were more expensive to stock and harder to maintain, which discouraged many fish enthusiasts from buying the brightly colored swimmers. That trend began to change earlier this decade, thanks in part to a decrease in cost and a feisty clown fish named Nemo. Disney’s animated hit, “Finding Nemo," did for the tropical fish industry what “101 Dalmatians" did for breeders of polka-dotted canines. Consumer demand went through the roof. Hansen’s company, Sea & Reef, is one of only a few whose tropical saltwater fish are grown from eggs produced in captivity."

Turns out doing this is a fantastically technical challenge and is an exemplar of ecosystems engineering!
Posted by Joost Bonsen at 00:35