Ron Winslow in the WSJournal spotlights the remarkable experience of Howard Snitzer who survived 96 Minutes Without a Heartbeat...

"Mr. Snitzer collapsed from cardiac arrest outside a grocery store in January, two men at a gas station across the street sprinted to his aid. Both volunteer firemen, they were soon joined by two dozen local police, firemen and rescuers from two neighboring towns in what became a 96-minute marathon to get Mr. Snitzer's heart started again. [...] Of the 300,000 annual cases of sudden cardiac arrest outside a hospital, 125,000 victims 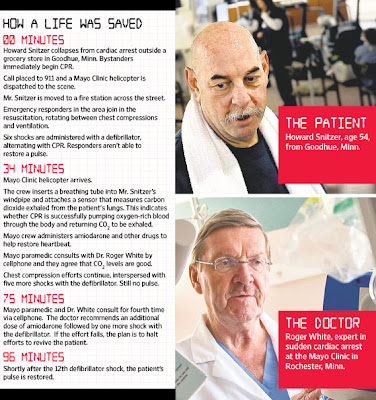 are found too late to be helped [...] The big worry in sudden cardiac arrest beyond restarting the heart is protecting the brain. [...] Recent AHA guidelines, which were published last fall, call for a more sophisticated and continuous monitoring of CO2 [...using the capnograph] After about an hour and 15 minutes had elapsed following Mr. Snitzer's collapse, [and 11 unsuccessful shocks with the defibrillator] the two decided that an additional dose of an anti-arrhythmia drug and one more shock -- the 12th -- would be the last chance. CPR continued as those steps were taken. At the 96th minute, soon after the shock was administered, Mr. Snitzer's pulse returned. [..] About five days later [he] was out of intensive care. In a report on the case published online last month by Mayo Clinic Proceedings, Dr. White and his colleagues reported that Mr. Snitzer "experienced a complete neurologic recovery" and described the episode as the "longest duration of pulselessness in an out-of-hospital cardiac arrest with a good outcome." Mr. Snitzer goes regularly to the Mayo Clinic for cardiac rehabilitation. He says he had hardly any idea what happened to him or how he came to survive it. But as he learned about the quick response from rescue workers and how the signals from the capnograph convinced them not to quit, he said: "I'm a regular guy. I happened to die at the right place at the right time."

Amazing stuff. And the capnography technology is just one example of our growing toolset for reviving victims and surviving trauma.
Posted by Joost Bonsen at 21:55